Even when they‘re 100% wrong, like they are in a high-profile case of police brutality.  They’re so convinced they did nothing wrong. in fact, that they’ve filed a petition to have a hearing into their excessive force case quashed.

What they ought to be doing is reading their own department’s declaration of what the Vancouver Police Department  is all about:

The men and women of the VPD believe in a level of service that routinely goes “Beyond the Call.” They embrace standards of performance that include Integrity, Professionalism, Accountability, and Respect (IPAR).

For us “regular folk”, that means they don’t want to answer any pesky questions about the night a year ago today when they brutally beat a man for the crime of answering his door and not speaking English.

You see, Constables Florkow and London were at the wrong address. They were responding to a report of domestic abuse, but they screwed up.  They screwed up bad.  They went to the wrong address, and when Yao Wei Wu answered the door in his pajamas after being woken up at 2am, they hauled him out of the house, down the cement stairs, onto the sidewalk and proceeded to beat the crap out of him.

His beating resulted in fractures to his face around his eyes and multiple bruises on his back, head and face.  He was beaten so badly his eye was swollen shut for days. 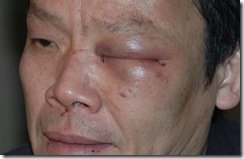 The case was referred to the Delta Police Department to investigate, and like the Blue Line tradition dictates, they cleared the two constables of any wrongdoing.

The Delta Police Department managed to lose a lot of credibility with that one.

In what has become typical of cases like this, police say that Wu resisted arrest and failed to follow their orders.  So they beat the crap out of him.

There are a couple of huge problems with this.  The first, is that unlike Kelowna resident Buddy Tavares, who was brutally booted in the face by Kelowna RCMP thug Geoff Mantler, Wu didn’t have the good fortune for his beating recorded for the world to see.

That’s a problem.  When it’s one beating victim’s word against two VPD constables, and no video, guess who’s gonna win?  It sure won’t be the beating victim, I can guarantee that.

The Vancouver Police Department issued a statement that said, in part:

“It was unfortunate that our officers had the wrong address and also that Mr. Wu, as we now have learned, saw the officers’ badges but unfortunately felt that he had to resist them.”

Wu’s lawyer, Cameron Ward, had a single word for the Delta Police investigation. That word?  “Farce.”

Wu is justifiably upset about both the beating and the subsequent whitewash by Delta Police.  He’s filed a civil suit against the two constables, the city of Vancouver the city of Delta,.the Vancouver and Delta police departments.

Naturally, because the police are always right, at least according to these two VPD constables, they didn’t even apologize for the beating.  Not even when they realized their screw-up was going to the wrong address.  Neither have either one ever been suspended, charged, or even reprimanded for their brutal beating of an innocent man.

Human rights activist Bill Chu and other concerned citizens have formed ”Concerned Group on Police Violence” to help Wu get justice in this awful case.

“The practice of police investigating police has proven to be disastrous for those seeking justice and civil rights and should end now. British Columbians deserve no less than completely independent investigations on such police abuses of power,” Chu said in a media statement released on behalf of the group in February. “This is not an isolated incident. Similar random police brutality can happen to anyone on the street or right in his or her own home.”

I think it’s disgusting and abhorrent that Vancouver City Police constables Nicholas Florkow and Bryan London have the audacity to try and halt an investigation into their brutal actions. 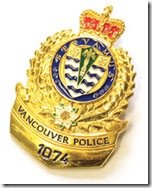 I know some guys who work for the Vancouver Police Department.  They’re good guys.  If it had been them that screwed up like this, and I can’t imagine them ever beating a guy like this in the first place, I know they’d be men enough to admit their mistake, not try and sweep it under the rug like Florkow and London.

These to are a disgrace to the shield they wear, and to the people they claim to serve and protect.

I bet you guys are really glad there was no video camera running while you were “restraining” the suspect, aren’t you.

Hey guys… instead of doing everything you can to hide from taking responsibility for your actions, maybe try and “man up”, admit what you did was wrong, and apologize to Mr. Wu and his family.

Believe it or not, being part of the Blue Wall doesn’t always make you right.

RCMP thug Geoff Mantler’s brutal kick in the face to Buddy Tavares (Thank God it was caught on tape!) ought to have taught us that much, right?