This is part of my ongoing series on Canadian Mass Murders.

It’s broken down into the following major sections:

All the information for this article was gleaned from Canadian newspaper stories published from 1970 through 1971, and the report of the killer’s death published in 1999. 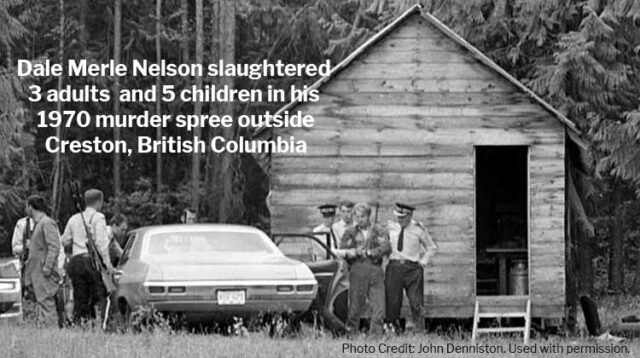 Dale Merle Nelson was a logger who liked to drink, do LSD and beat his wife Annette.

In early 1970 Nelson became depressed and attempted suicide. He spent two months at Riverview Provincial Mental Hospital in Coquitlam, BC.

Had he been successful, the eight innocent people he brutally murdered would have lived to see Christmas. That’s probably also true if he was just held longer at the lower mainland mental health facility.

But Dale Merle Nelson survived his suicide attempt and doctors at Riverview released him from the facility in January, 1970.

Then in June, Dale Nelson was convicted of assaulting his wife, but was sentenced to a year probation, not jail.

“We pleaded with the judge to send him back to Crease,” said Iris Herrick, Dale Nelson’s mother-in-law, referencing Riverview’s now-closed Crease Clinic.

On Friday, September 4, 1970, Dale Merle Nelson got drunk and, most likely, high on LSD, grabbed a 7mm Mauser 98k bolt action rifle he previously lent to a friend, and used it to murder eight people, including five children, in and around Creston, BC.

Iris Herrick didn’t ease anyone’s nerves after Dale Nelson was identified by RCMP as the suspect.

“I don’t think they’ll get him [alive] this time,” she said.

When asked if he would shoot it out with police, she replied, “Either that or he’ll do it himself.”

A six-man team with dogs found an unidentified man believed to be Dale Nelson sleeping behind the West Creston home of Dale Merle Nelson.

They radioed for help, and another nine RCMP units descended on the remote location where RCMP members surrounded the shack and the area behind it and ordered Dale Nelson to surrender.

“You are surrounded. Stand up, put your hands in the air and walk towards the cabin,” RCMP Superintendent Terrence Stewart said through a loudhailer.

Nelson did not respond.

“All units. Hold your fire.”

The command to come out was repeated a few times and the killer eventually said he would come out.

When he refused to get up off the ground where he lay, Constable Glen Manson sent his dog to subdue the killer.

Nelson got up to defend himself, but the dog threw him to the ground and police swarmed him.

At 5:05 pm on Sunday, September 6, 1970, Dale Merle Nelson was arrested and transported to the Creston RCMP detachment, where he was charged with one count of non-capital murder.

He would later be charged for killing all eight victims.

“He didn’t make any statements after we got him,” said RCMP Corporal James Barr, “but he did answer ‘yes’ to some of our questions.”

Those answers led investigators to the area where the mutilated body of 8-year-old Cathy Phipps was found.

It took 50 weary RCMP members and 3 RCMP dogs over 40 hours to locate and capture the mass murderer, which they did late Sunday afternoon on September 6, 1970.

No reason ever uncovered why Dale Merle Nelson killed and mutilated the bodies three adults and eight children.

Once the RCMP identified the man they were hunting, they put up road blocks and told area residents to lock their doors and not pick up hitchhikers.

RCMP released a description of Dale Merle Nelson, their only suspect, to the press and asked anyone with information about where Nelson was hiding to contact them.

Someone called police and reported an unidentified person moving along a ridge behind West Creston towards the area of Nelson’s home – about half way between the Phipps and Wasyk homes.

RCMP searchers were able to locate the person before dark.

A team of six RCMP members and a police dog stationed themselves on the south end of the ridge about Nelson’s home, but the killer managed to make it past the team sometime during the night.

On Sunday morning they discovered the plastic covering on the exterior of a window sliced open and what appeared to be evidence someone had hastily grabbed provisions.

The search parties were notified and the six-member team worked to pick up the killer’s trail.

While those RCMP members kept searching for Dale Nelson, another team of RCMP members escorted his wife Annette, to the Nelson home so she could grab some essentials for her and her three children.

While she was packing up what she needed, the team behind the house radioed that they found a man sleeping under a tree.

Annette Nelson was hastily escorted out of the house and back to Creston to where she and her children were staying.

When Dale Nelson refused get up off the ground, Constable Glen Manson sent his dog to subdue the suspect.

He got up as the dog attacked, but was no match for the trained canine. After the RCMP dog knocked him to the ground, a barefooted and unshaven Dale Merle Nelson was arrested without a struggle, ending the largest manhunt the area has ever seen.

What nobody knew then was almost two years later to the day, RCMP in the Kootenays would be on the hunt for another mass murderer, escaped mental patient William Bernard Lepine.

At about 1am on September 5th, Maureen McKay, a neighour of the Wasyk family, was woken up by 12-year-old Debbie Wasyk, who said someone just killed her mother and sisters and was heading for the McKay home next.

When RCMP members arrived at the Wasyk home, they discovered the Shirley Wasyk’s body. She was beaten to death with a blunt object. They also discovered the body of 8-year-old Tracey Wasyk. She was stabbed multiple times.

Believing the murderer was on his way to the McKay residence, RCMP members closed the house and sped off to save the McKay family.

What they didn’t know was the murderer, Dale Merle Nelson, was still at the Wasyk residence.

When they returned some time later, the body of Tracey Wasyk was gone.

They eventually found the young girl’s decapitated, dismembered and mutilated body, with parts strewn over a 50-foot area about two miles away. An abandoned vehicle presumed to be used by the killer was nearby.

Alex Wasyk, husband of Shirley and father of Tracey, was away working at a logging camp at the time of the murders.

I can’t begin to imagine his heartbreak at learning his wife and young daughter were dead.

When RCMP members arrived at the Phipps home they discovered the bodies of six of the seven family members shot in the head, and their bodies mutilated.

Missing from the home was 8-year-old Cathy Phipps, who police believed was held hostage while he subdued and murdered the rest of the family.

One can only pray the young girl wasn’t forced to witness the slaughter and mutilation of her entire family.

On Wednesday, September 9, 1970, the murder victims from two families were put to rest in the Creston cemetery.

Separate funeral services were held for the Wasyk and Phipps families.

The RCMP escorted three coaches carrying the bodies of the Phipps family to the cemetery where there were buried.

Five hours later, a similar service was held for Shirley Wasyk and her daughter Tracey at the Creston Legion Hall.

The Trial and the Jury’s Verdict

Dale Merle Nelson’s trial lasted ten days, but the outcome was all but guaranteed after Nelson’s defence attorney told the court his client had killed all eight victims.

During the trial, Crown counsel introduced a document describing the killing at the Wasyk house. That document described “certain unnatural acts with 8-year-old Charlene Wasyk” by Dale Nelson, and said he attempted to get Charlene to help him kill her sister Tracey.

In his closing arguments, Crown counsel T. G. Bowne-Cohurst suggested Nelson’s motive for the murders was his own perverse sexual gratification, saying Nelson murdered the adults so he could have his way with the little children.

On Friday, April 2, 1971, despite contradictory testimony about Nelson’s mental health, the jury of eight men and four women took only 80 minutes to return with a guilty verdict.

“Do you have anything to say?” Justice Aikins asked.

“No, your worship,” Nelson replied.

“I sentence you now to only penalty for non-capital murder – life in prison.”

During the trial, Nelson’s defence attorney told the court his client had killed all eight victims.

Nelson was eligible for parole in 1980, but was never released from prison.