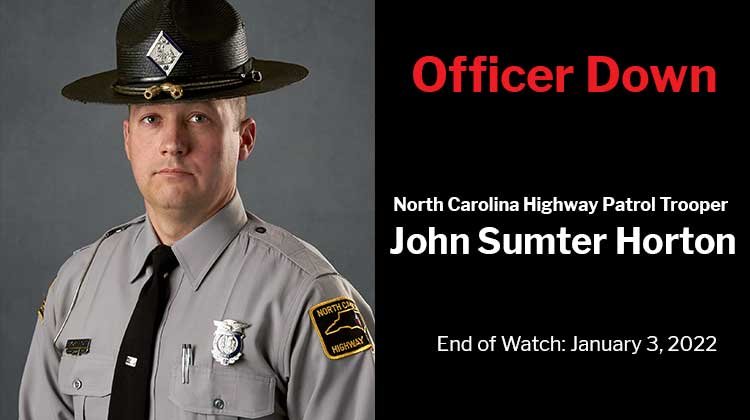 North Carolina Highway Patrol Trooper John Sumter Horton died in the most senseless way possible – killed when another officer responding to his aid lost control of their vehicle. To compound the tragedy that responding officer was John’s brother, Trooper James N. Norton.

Trooper John Horton was struck and killed by a patrol car while conducting a traffic stop near the intersection of High Shoals Church Road and Goodes Grove Church Road in Mooresboro at about 9:00 pm.

The area the crash occurred in had experienced snow and sleet throughout the day.

Trooper Horton had served with the North Carolina Highway Patrol for 15 years. He is survived by his wife, six children, parents, sister, and two brothers.

Master Trooper John Sumter Horton, 42, passed away in the line of duty January 3, 2022. John was born on November 17, 1979 in Rutherfordton, NC, to Leslie and Martha Horton who reside in Forest City, NC.

John bravely served as a Master Trooper for the North Carolina Highway Patrol for 15 years. Above all else, he loved God and his family. His daily desire was to share the love of Christ and the message of the cross.  He was a past member of Holly Springs Baptist Church and an active member of Drury Dobbins Baptist Church.

Besides his parents, those left to cherish his memory include his loving wife and high school sweetheart, Ashley Houser Horton; children, Liliana, Sumter, Gunner, Slade, Avalyn, and Huxley Horton; siblings, Briana Reid, Nick Horton, and Joseph Horton and many other extended family members.

In lieu of flowers, donations can be made to the benevolent fund for the Family of Master Trooper John S. Horton at the State Employees Credit Union.

The family wishes to thank a long list of people who have come to their aid during this tragedy. Thank you all for the outpouring of love and prayers.