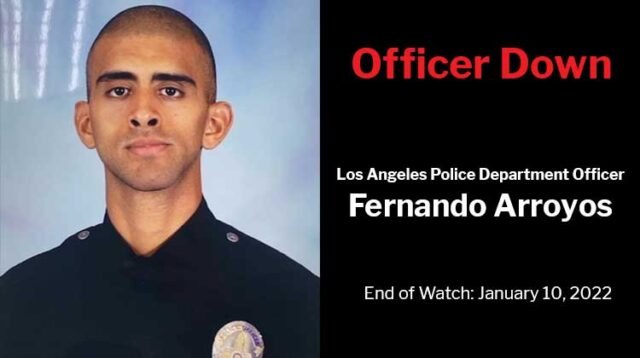 On January 10, 2022, off-duty LAPD Officer Fernando Uriel Arroyos was house-hunting with his girlfriend. It was his first day off after working a series of patrol shifts and he was excited to find a home for him and his girlfriend to live.

What should have been a joyous and fun-filled day for LAPD Officer Fernando Arroyos and his girlfriend turned to tragedy as three members of the Florencia 13 gang and two of their girlfriends decided robbing the young couple was the way to end that fateful Monday evening.

As the confrontation escalated, Officer Arroyos stepped in front of his girlfriend and directed her to safety as he faced the attackers. They opened fire on the off-duty officer, mortally wounding the young man, but not before he shot one of his attackers.

When deputies arrived at the scene, they found the off-duty officer lying in an alleyway with at least one gunshot wound. Deputies transported him to St. Francis Medical Center in Lynwood where he later died from his injuries.

The suspects fled in their vehicle, identified as a black pickup truck, in an unknown direction.

“He had a promising future … that was taken away viciously over a street robbery,” LAPD Chief Michel Moore said.

Department of Justice announced that Luis Alfredo De La Rosa Rios, 29; Ernesto Cisneros, 22; Jesse Contreras, 34; and Rio’s girlfriend Haylee Marie Grisham, 18, are all charged with violent crime in aid of racketeering and could face the death penalty if convicted.

Officer Fernando Fernando Uriel Arroyos is survived by his girlfriend, his mother and step-father.