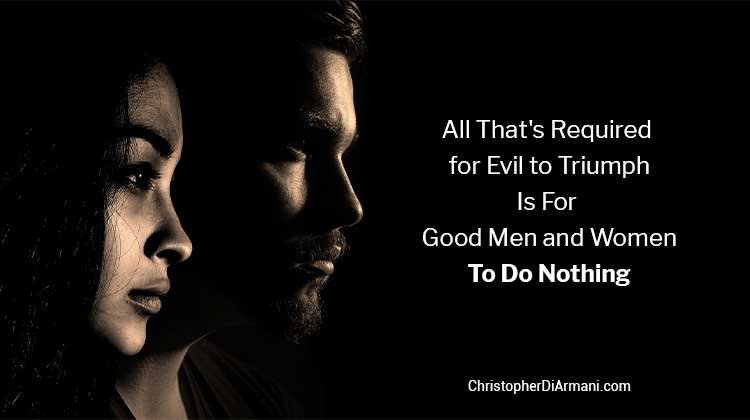 “All that is required for evil to triumph is for good men to do nothing.“

This timeless maxim and its many variants are widely attributed to Edmund Burke, although according to many sources he never put his idea into this concise a statement.  Others attribute the statement to John Stuart Mill’s inaugural address to the University of St. Andrews in 1867, and even to a translation of Leo Tolstoy’s classic “War and Peace”.

That said, who actually wrote it first is not important.  What is important is the clear call to action contained within it.

Desmond Tutu essentially says the same thing in his quote,

“If you are neutral in situations of injustice, you have chosen the side of the oppressor.”

Every human being has the duty to confront evil wherever he or she finds it.  Period.

That’s one of the reasons I wrote about Leah-Lynn Plante, Matt Duran and Katherine “Kteoo” Olejnik and their fight against the tyranny of the US Grand Jury system the other day.  These three individuals made a conscious decision to stand up against state tyranny.  They stood up for their Right to Remain Silent in a grand jury system that routinely strips people of their constitutional rights and freedoms, all in the name of the greatest evil of all: expediency.

Standing up to evil is what is important.  Why we stand up to evil, not so much.

I will always support those courageous people who choose to battle evil where they find it.  I will always shine the light of truth on cases where evil is triumphant simply because we mere citizens are too terrified to stand up to it.

This is, of course, a frightening or should I say terrifying thought for most people, and for good reason.  Taking on the agents of the state is a terrifying prospect, but I cannot imagine a world where individuals have NOT stood up to tyranny.

Martin Luther changed the world by standing up to the Roman Catholic Church when nobody else would.

Rosa Parks changed the world when she refused to sit in the back of the bus.

Emily Murphy changed the world when she challenged the status quo that a woman could not serve as a police magistrate in Alberta.

Five Alberta women, Emily Murphy, Henrietta Muir Edwards, Nellie McClung, Louise McKinney and Irene Parlby changed the world when they refused to accept the premise that women were not capable of serving in the Canadian Senate.

These are just a few cases where good people have stood up to injustice and often at great personal expense.

The United States of America would not even exist if it weren’t for the courageous men who took it upon themselves to stand up to British Tyranny and sign the Declaration of Independence.

We all know right from wrong.  It’s written on our very hearts.  Yet when faced with evil we so very often run and hide, or at the very least stand and watch in silent horror.

You need not be a believing Christian to know that standing up to evil is your duty as a citizen.  If you are, then you will find great comfort what the Bible states in Deuteronomy 31: 6, 31:7, 31:23 and Joshua 1:18:

“Be strong and of a good courage.  Do not fear nor be afraid of them.”

This sentiment is restated in similar fashion 14 times throughout the Old Testament.

It is our highest duty to stand up to evil wherever we find it.  Yes, that will come at a cost, be it time, treasure or even our very liberty.

Will we be afraid?  Yes, in all likelihood.

Should we stand silent while our brother is terrorized by an out-of-control state?

I urge you, the next time you find yourself confronted with evil, be it large or small, to make a stand for what is right.

It can be something as seemingly insignificant as telling the bully to stop being rude.  It can be as big as breaking the law in order to shine the light of truth on injustice, or what we would call civil disobedience.

I will leave you with this thought from Margaret Mead:

“Never doubt that a small group of thoughtful, committed citizens can change the world; indeed, it’s the only thing that ever has.”