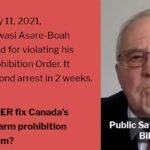 When police arrested drug dealer Matthew Kwasi Asare-Boah on January 28, 2021, they charged him a series of drug and firearms offences, including two counts of Possession of a Firearm Contrary to Prohibition Order. Less than two weeks later, the Ontario Provincial Police arrested Matthew Kwasi Asare-Boah again and charged him with three new drug offences and two counts of … END_OF_DOCUMENT_TOKEN_TO_BE_REPLACED