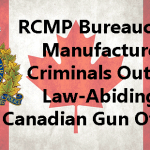 The priorities of the Royal Canadian Mounted Police (RCMP) are screwed up. You may think tracking down child pornographers might be a bigger priority for RCMP investigators but I suspect you would be wrong. The RCMP seems far more intent on tracking down law-abiding gun owners and building files on them instead. In 2013 and 2013, for example, the RCMP spent $1 million on … END_OF_DOCUMENT_TOKEN_TO_BE_REPLACED