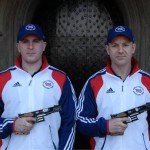 Britain's anti-gun fanaticism means they would rather not field anyone in the  Olympic Men's Rapid Fire Pistol event than allow two serving British soldiers to compete.  Britain's hypocrisy is obviously at an all-time high leading up to the 2012 Olympics. Warrant Officer Morgan Cook and Corporal Ian Jack both shot qualifying scores that would have put them on Britain's O … END_OF_DOCUMENT_TOKEN_TO_BE_REPLACED