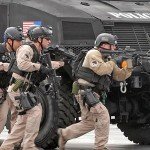 Is the United States Department of Homeland Security (DHS) planning a war on American citizens? It’s a valid question, I suspect, in the wake of news that DHS has ordered 450 million rounds of .40 calibre handgun ammunition and has an open tender for 175 million rounds of .223, the ammunition used in the M-16 assault rifle. That’s a LOT of bullets by anyone’s … END_OF_DOCUMENT_TOKEN_TO_BE_REPLACED

Love them or hate them, the National Rifle Association (NRA) has made a great tribute video to the troops... enjoy!   … END_OF_DOCUMENT_TOKEN_TO_BE_REPLACED