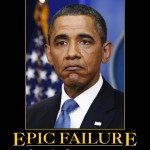 In a column titled "A disaster called Obama", columnist Yigal Wait writes scathingly about the failure of "Mr. Hope and Change", Barack Obama. While his column tears strip after strip from the hide of the most useless President in American history, his last two lines are brilliant: Bush is already a distant dream, while Obama is a living and breathing nightmare. Now all … END_OF_DOCUMENT_TOKEN_TO_BE_REPLACED