A mere citizen would be facing a myriad of criminal charges, but that's to be expected in the New Canada, where Justice and Criminality are determined not by your actions, but by your job title. Take the case of Victoria Police Chief Jamie Graham.  Chief Graham left his loaded service pistol under the front seat of his police car. Any mere citizen would be, as I said, … END_OF_DOCUMENT_TOKEN_TO_BE_REPLACED 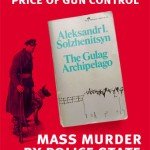 The many failures of Canada’s “gun control” scheme are well known to anyone willing to actually look at the facts.  For those unwilling to do so, however, no amount of proof that the system doesn’t work will ever be enough. The latest proof of the uselessness and dangerousness of the current gun control scheme comes from Kamloops, British Columbia, where a convicted drug deal … END_OF_DOCUMENT_TOKEN_TO_BE_REPLACED