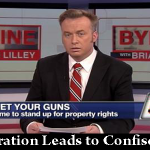 Sun News Commentator Brian Lilley did an excellent segment on how registration leads to confiscation in his January 8, 2013 installment of his show Byline.  In that segment Lilley described the insanity of Ian Thomson being forced to defend himself against criminal charges for the so-called “crime” of defending his life against 4 men trying to kill him. He went on to … END_OF_DOCUMENT_TOKEN_TO_BE_REPLACED