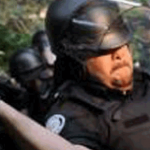 You’d think judges would feel some semblance of shame eventually, but that just isn’t the case. When it comes to sentencing police officers convicted of criminal offences our judges fall all over themselves pandering to a misguided sense of justice. Why is it wrong to send criminal cops to jail? When it comes to sentencing a mere citizen convicted of the same criminal … END_OF_DOCUMENT_TOKEN_TO_BE_REPLACED