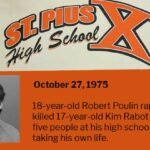 This is part of my ongoing series on Canadian Mass Murders. This particular entry is quite lengthy and is broken into the following sections: My Preamble Case Overview The Victims Good Parents and Family Life The Coroner's Inquest Coroner Uses Inquest as Platform to Promote Gun Control Coroner Deeply Critical of Parents A Page from the … END_OF_DOCUMENT_TOKEN_TO_BE_REPLACED

This is part of my ongoing series on Canadian Mass Murders. [ Technically, not a mass murder, but I'm including it in this series because the killer's attempt to kill his estranged wife failed and a firearm was used. ] On Friday, April 5, 2013, Robert Charron walked into the Les Racines de vie Montessori day care in Gatineau, Quebec, executed a 38-year-old man in … END_OF_DOCUMENT_TOKEN_TO_BE_REPLACED

There was another school shooting recently, this time in Nebraska. Another young man decided the only appropriate response to being expelled from school was to come back and kill the vice-principle that expelled him. That’s another one of those permanent solutions to a temporary problem that I am really not fond of. I don’t know what 17-year-old student Robert Butler Jr. … END_OF_DOCUMENT_TOKEN_TO_BE_REPLACED

Some kids in Toronto decided that shooting a gun inside the high school was a good idea.  Everyone ran from the scene, and nobody was killed, thank God.  A few probably had to clean their shorts after too, but that's hardly the worst thing in the world, especially if the jerk who pulled the trigger was the one doing the shorts-cleaning. The downside is that the kid who … END_OF_DOCUMENT_TOKEN_TO_BE_REPLACED