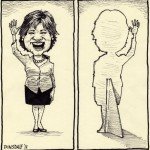 While hardly a surprise, I was holding out hope that the so-called “savior” of British Columbia, unelected Premier Christy Clark, would actually stand up to Ottawa and show the citizens of this fine province who is running the show. Apparently, the answer to that is quite simple: Ottawa. Yesterday, just one hour after word leaked that BC and Ottawa were about to sign a … END_OF_DOCUMENT_TOKEN_TO_BE_REPLACED