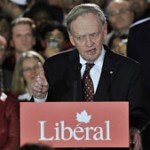 In the wake of the utter destruction of the Bloc Quebecois and the Liberal Party of Canada the cries for saving the taxpayer subsidies to these failed political parties is already getting some backing. None other than the stalwart defender of liberty, Jean Chrétien,  has gone on the CBC begging for Harper to keep the political party trough-feeding that Chretien's Liberal … END_OF_DOCUMENT_TOKEN_TO_BE_REPLACED