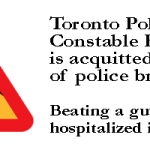 Toronto Police Services constable Edward Ing hit the jackpot with his retrial on charges of police brutality.  Despite a scathing indictment of his actions by the judge in his first trial, Justice Steven Clark managed to rule: “There was an air of reality to his explanation.” Wow.  Really? That's a far cry from what Justice J.E. Allen said while convicting Edward Ing in his … END_OF_DOCUMENT_TOKEN_TO_BE_REPLACED