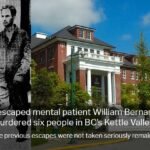 This is part of my ongoing series on Canadian Mass Murders.   On July 6, 1972, William Bernard Lepine aka William McConnell, an escapee from the Riverview Provincial Mental Hospital in Coquitlam, was recaptured after a high-speed car chase down British Columbia’s Highway 3. It was his third escape from the facility since he was first committed earlier that … END_OF_DOCUMENT_TOKEN_TO_BE_REPLACED