Julie Lynn Gaudet made the news in January when she was sentenced to 30 days in jail for possession of a handgun for a purpose dangerous to the public peace. It was the latest in a long line of convictions for the 40-year-old woman who suffers from mental health issues and addiction. On September 21, 2019, while using a bank machine at the Bank of Montreal in the … END_OF_DOCUMENT_TOKEN_TO_BE_REPLACED 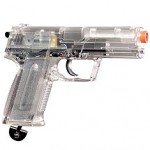 As the old saying goes, "Boys will be Boys", and often that's what we say when some kids make stupid but non-fatal mistakes.  Sometimes though, boys get themselves into hot water because they just don't think things through. That's exactly the case in Campbell River, where three boys, ages 13, 15 and 16 were carrying their pellet guns down the road. That in and of itself … END_OF_DOCUMENT_TOKEN_TO_BE_REPLACED

Under the heading of moronic are three young Saskatoon men. They thought driving around town pointing pellet guns at people was a good idea. After a "high-risk takedown" by Saskatoon Police, the three probably don't think it's so cool now. After searching the vehicle police found three pellet guns, marijuana and "drug paraphernalia". Note to kids:  If you're going to … END_OF_DOCUMENT_TOKEN_TO_BE_REPLACED