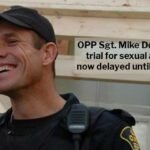 OPP Sgt. Mike Dolderman’s trial for five counts of sexual assault and five counts of breach of trust was kicked down the road. Again. Dolerman’s trial was originally scheduled to begin on July 28, 2020, but court backlogs and COVID-19 restrictions pushed his trial to October 6th. At the October 6th hearing, Dolderman’s lawyer requested a 12-week adjournment to review … END_OF_DOCUMENT_TOKEN_TO_BE_REPLACED 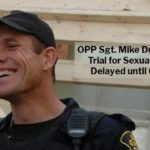 The trial of Ontario Provincial Police Sergeant Mike Dolderman, accused of five counts of sexual assault and five counts of breach of trust, won’t take place until October 6th, at the earliest. It’s possible Dolderman's trial will be delayed even further. Administrators for the Guelph Ontario Court of Justice announced all trials slated for July 28th are now delayed until … END_OF_DOCUMENT_TOKEN_TO_BE_REPLACED