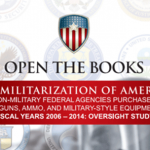 Open the Books found there are now over 200,000 non-military federal officers with arrest and firearm authority, surpassing the 182,100 personnel who are actively serving in the U.S. Marines Corps. The Second Amendment of the United States Constitution was written, in part, to protect American citizens from their own government.  The Founding Fathers had just rid America of … END_OF_DOCUMENT_TOKEN_TO_BE_REPLACED