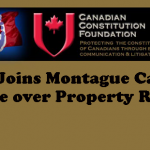 The Canadian Constitution Foundation (CCF) will take on Bruce & Donna Montague’s case after Doug Christie’s death left them without counsel to fight property forfeiture under Ontario's Civil Forfeiture Law. The Canadian Constitution Foundation (http://www.theccf.ca) announced today that it would provide legal counsel to Bruce and Donna Montague of Dryden, Ontario in … END_OF_DOCUMENT_TOKEN_TO_BE_REPLACED

Katey Montague, the daughter of former Ontario gunsmith Bruce Montague, has just released another video update on the decision by the Ontario Government to steal the Montague family home using Ontario's Civil Remedies Act.  This is legislation that was supposedly to be used against drug dealers and organized crime, but is now being used against ordinary citizens the government … END_OF_DOCUMENT_TOKEN_TO_BE_REPLACED