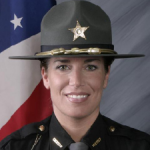 This case sucks. I mean it really sucks. Some slimebag decided New Year's Day is a good day to shoot up his neighbour's trailer.  The neighbour called the police.  Go figure.  That's where it gets really bad, really fast. Deputy Suzanne Waughtel-Hopper was apparently the first on the scene.  She'd been sent there by dispatch after the report of shots fired came in. She … END_OF_DOCUMENT_TOKEN_TO_BE_REPLACED