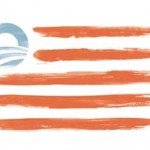 One Nation Under ... Obama??? The Cult of Obama knows no shame. Remaking the United States in his divine image, Barack Hussein Obama has released his idea of the new American Flag. Excuse me while I vomit into the nearest garbage can... This piece of trash and another similar version in the outline of the continental United States are for sale on BarackObama.com, the … END_OF_DOCUMENT_TOKEN_TO_BE_REPLACED