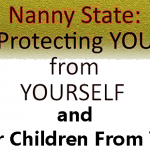 The idea of an appointed government overseer for every person born sounds ludicrous, doesn’t it?  Surely such a bloated bureaucracy exists only in the imagination of Nanny State promoters, right? Who could believe such a plan was hatched in Scotland. Not only was it hatched in Scotland, this Big Brother’s Wet Dream, also known as the Children and Young People … END_OF_DOCUMENT_TOKEN_TO_BE_REPLACED