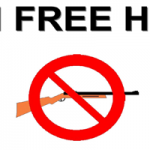 As I wrote the other day in "And the 2012 Hypocrisy Award goes to…", anti-gun hypocrites believe guns in their hands (or the hands of their publicly-funded security agents) are absolutely fine... it's guns in the hands of we mere citizens that they think are the big problem. The gun-banning fanatics insist that if we just took all the guns guns away from those regular folk … END_OF_DOCUMENT_TOKEN_TO_BE_REPLACED