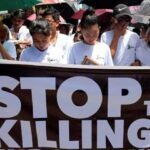 "The first thing we do, let's kill all the lawyers," William Shakespeare famously said. In the Philippines, it appears someone (many argue it is Philippine President Rodrigo Duterte) took Shakespeare's words to heart. From 2006 to 2019, between 43 and 61 lawyers and other court staff were murdered. Many others were attacked but survived the attempt on their lives. The … END_OF_DOCUMENT_TOKEN_TO_BE_REPLACED