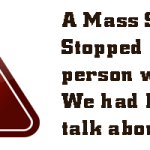 Does anyone aside from me find it bizarre that the mainstream press utterly ignores shootings where the would-be mass killer is stopped by a good guy with a gun? The restaurant and theatre shooting in San Antonio, just 2 days after the school shooting tragedy in Connecticut, is basically a ghost story as far as the mainstream media is concerned.  Outside of “pro-gun” … END_OF_DOCUMENT_TOKEN_TO_BE_REPLACED