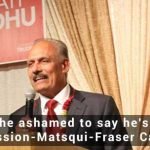 Liberal MP Jati Sidhu's idea of "working hard for you" is to change the name of our electoral district without ever consulting the "mere citizens" whose interests he is supposed to represent. He did this out of ego, out of his own insecure need to be called "the MP for Abbotsford." I wrote a letter to the editor and sent it to every newspaper in the Mission—Matsqui—Fraser … END_OF_DOCUMENT_TOKEN_TO_BE_REPLACED