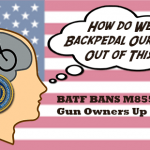 M855 ammunition is .223 calibre “green tip” ammunition most often used with AR-15 rifles. It is also used in some AR-15-style handguns: expensive and large handguns. The Bureau of Alcohol, Tobacco and Firearms issued a proposal to ban this specific type of ammunition on February 13, 2015, claiming AR-15-type handguns are a “significant threat” to law enforcement … END_OF_DOCUMENT_TOKEN_TO_BE_REPLACED