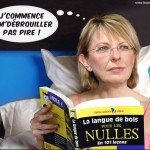 Quebec's self-proclaimed Minister of Propaganda says "unlicensed" journalists should be "controlled"... It's the kind of thing you would expect in Nazi Germany or in a bad parody of the timeless George Orwell classic 1984, NOT what you would expect to come from the mouth of someone who claims to represent the people in an [allegedly] democratic society. "Journalism should … END_OF_DOCUMENT_TOKEN_TO_BE_REPLACED