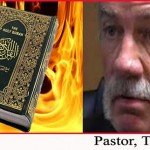 Florida Pastor Terry Jones is best known for his outspoken opposition to islam.  He made international headlines when he burned a Koran two years ago on the anniversary of 9/11.   He also created and promoted “International Burn a Koran Day” as a way of protesting against radical islam. Terry Jones was scheduled to debate Toronto imam on the film Innocence of Muslims outside … END_OF_DOCUMENT_TOKEN_TO_BE_REPLACED