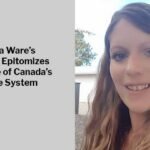 Philip Toner murdered Brenda Ware less than six weeks after he was released from prison, where he served five years for raping a 15-year-old girl. According to documents obtained by CBC, the Parole Board of Canada (PBC) had serious concerns about Philip Toner’s risk of re-offending. His parole was revoked three times during statutory release (after an offender serves two … END_OF_DOCUMENT_TOKEN_TO_BE_REPLACED