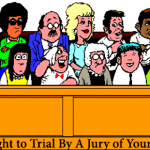 At first blush the Ontario Court of Appeals ruling that tossed out the manslaughter conviction against Clifford Kokopenace seems absurd. Kokopenace and his lawyer successfully argued that because there were no First Nations people on the jury the trial itself was unfair and constituted a breach of Kokopenace’s Charter Rights. Actually, at first glance the ruling in R. v. … END_OF_DOCUMENT_TOKEN_TO_BE_REPLACED