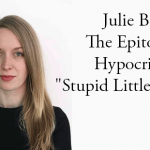 For those who don't know, Julie Bosman is a journalist who works for the New York Times. That's the title the New York Times gives her, anyway. I call her an irresponsible and hypocritical little bitch who felt it was her absolute right to violate the privacy of Ferguson Police Officer Darren Wilson. Officer Darren Wilson hit the national stage when he shot and killed … END_OF_DOCUMENT_TOKEN_TO_BE_REPLACED