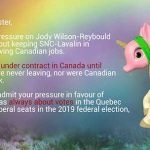 Despite the rhetoric spewing from the Prime Minister and everyone in his office, the SNC-Lavalin scandal was always about votes, not jobs. So why did Prime Minister Justin Trudeau bury Criminal Code amendments designed to favour SNC-Lavalin deep in the bowels of the budget bill? Why did he and his minions pressure Jody Wilson-Reybould repeatedly over four months to use … END_OF_DOCUMENT_TOKEN_TO_BE_REPLACED