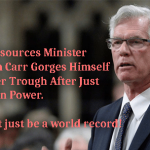 Gotta love the attitude of the Liberals... after just 3 months in power we've got Liberal Minister of Natural Resources Jim Carr gorging himself at the Taxpayer Trough.  This Entitled One decided there was no reason he should pay for hockey tickets when he can force we, the mere citizens of Canada, to pay for them instead. He billed us $1,784 for tickets to a Winnipeg Jets … END_OF_DOCUMENT_TOKEN_TO_BE_REPLACED