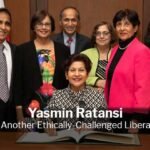 What is it with Liberal Members of Parliament?  Do they honestly believe the rules don't apply to them? That's the question at the top of my mind after news broke that Yasmin Ratansi, Member of Parliament for Don Valley East, hired her sister, Zeenat Khatri, and lied about it. CBC reports Yasmin Ratansi employed her sister from 2005 to 2011 when Ratansi lost her seat in … END_OF_DOCUMENT_TOKEN_TO_BE_REPLACED