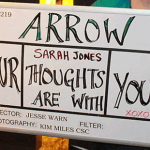 Sarah Elizabeth Jones died on the set of "Midnight Rider", a film directed by Randall Miller, just over a year ago. The director wanted to "steal" a shot on a railway trestle without obtaining any permits or permission from the railway. When a train came through it hit a bed the crew had placed on the tracks for the shot, which in turn hit Sarah Jones and knocked her into the … END_OF_DOCUMENT_TOKEN_TO_BE_REPLACED