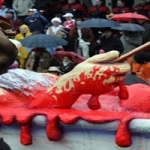 President Barack Obama will do what every "gun control" advocate does when attempting to advanced more Liberty-crushing leftist ideology: he will bathe in the blood of the victims.  Worse, he will cower behind a human shield of children while he proclaims his desire to rid America of guns. In the Brave New America, it's Obama's Way or the highway as he attempts to force his … END_OF_DOCUMENT_TOKEN_TO_BE_REPLACED