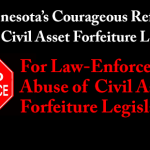 Five years ago scandal over the horrific abuse of Minnesota's civil asset forfeiture law rocked the state. Their Metro Gang Strike Force (disbanded in the wake of the scandal) among others, grossly abused the power given them by the state's civil forfeiture legislation, giving way to these reforms. The Metro Gang Strike Force didn't care who they stole from. Anyone was fair … END_OF_DOCUMENT_TOKEN_TO_BE_REPLACED