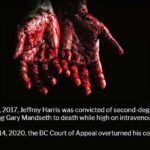 On February 10, 2015, Jeffrey Harris was addicted to heroin, selling cocaine to support his ­3-4 fixes-per-day habit, living in the village of Lillooet, British Columbia. Gary Mandseth was Jeffrey Harris’ drug dealer. Often when Harris showed up at Mandseth’s house to buy more cocaine, Harris testified, Mandseth would inject him with heroin. In a move that ultimately … END_OF_DOCUMENT_TOKEN_TO_BE_REPLACED