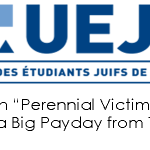 Who “owns” your Twitter posts? The answer might just surprise you. It’s not you. So says a court in New York State. Judge Matthew Sciarrino Jr. ruled that Twitter user Malcom Harris has “no proprietary interests” in his own Twitter posts and ordered the social media giant to hand over all of Harris’ past tweets including those he had deleted. Not only is anything you … END_OF_DOCUMENT_TOKEN_TO_BE_REPLACED