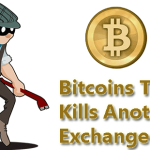 A few days ago I wrote an article about the failure of the world’s largest Bitcoins exchange, Mt. Gox, titled “Bitcoins Gold Rush Goes Bust”. In that article I warned this wouldn’t be the last exchange to go down, that in fact it was just the first of many. If you invested in Bitcoins you had best dump this infatuation while it still holds some value and before other exchanges … END_OF_DOCUMENT_TOKEN_TO_BE_REPLACED