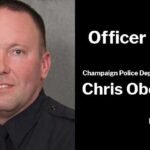 This is part of my ongoing series Officer Down - in honour of police officers slain in the line of duty. Shortly before 3:30am on May 19, 2021, the Champaign Police Department received a call about a domestic disturbance. Officer Chris Oberheim responded, as did a second officer. Both were met with a hail of gunfire as they exited their squad cars. They responded … END_OF_DOCUMENT_TOKEN_TO_BE_REPLACED