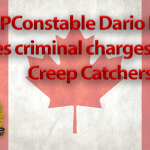 Creep Catchers is a growing group whose goal is to identify and publicly shame men looking for sex with underage girls.  Here in British Columbia it’s the Surrey chapter currently making headlines. Their video, live-streamed as it happened on September 7th, resulted in Constable Dario Devic’s arrest the following day.  Devic is currently suspended from active duty and faces c … END_OF_DOCUMENT_TOKEN_TO_BE_REPLACED