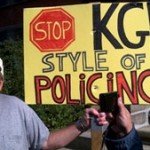 This past Thursday morning, January 19th, Charles LeBlanc had eight members of the Fredericton City Police show up at his low-rent apartment.  They arrested him and seized his computer equipment, but they refused to charge him with any crime. On the surface, it doesn’t look like much, does it?  Just some guy on welfare getting busted by police.  He obviously had it coming for … END_OF_DOCUMENT_TOKEN_TO_BE_REPLACED