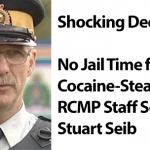 Tonight as I searched for information on another RCMP case I stumbled upon the conclusion to the case of cocaine thief RCMP Staff Sergeant Stuart Seib. I originally wrote about Staff Sergeant Seib back in January 2012 when he claimed the coveted #9 spot on the top 25 reasons to dump the BC RCMP.  That was, of course, before the BC Government renewed the RCMP policing … END_OF_DOCUMENT_TOKEN_TO_BE_REPLACED