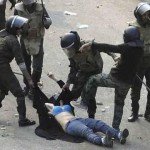 There has been a lot of uproar over the video footage of armed Egyptian Army thugs brutally beating an Egyptian woman in Tahrir Square in downtown Cairo, and for good reason.  The heinous actions were caught in a video (below) that showed with stark clarity the extent of how little things have changed in Egypt, despite the removal of former dictator Hosni Mubarak. The … END_OF_DOCUMENT_TOKEN_TO_BE_REPLACED