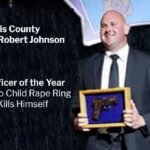 Sergeant Robert Johnson shot himself in his truck which was parked on the Highway 787 Bridge in North Liberty County. Thus ended a six-hour standoff between Johnson and negotiators from the County Sheriff’s Office and Texas Ranger. Harris County Precinct 1 Sergeant Robert Johnson, once named Officer Of The Year, killed himself after confessing to a long history of sexually … END_OF_DOCUMENT_TOKEN_TO_BE_REPLACED